A group gathered with signs and flags in front of the Canada Post office on Provencher Boulevard in Winnipeg on Friday afternoon to send a message to their local mail carriers.

The rally organized by People for Posties and Solidarity Winnipeg was to support postal works amidst ongoing labour negotiations.

“Our post office is under attack, our public services are under attack and we need to fight back,” Basia Sokal, vice-president of CUPW Local 856, said to the crowd. 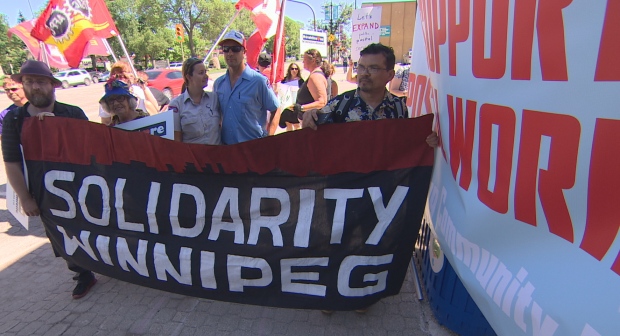 People across Canada were prepared for their mailboxes to remain empty at the start of the week, but on Monday Canada Post withdrew its threat to lock out its workers.

Canada Post and the Canadian Union of Postal Workers are far apart on two major issues — wages and pensions. They have been negotiating for seven months, including 60 days of conciliation talks and more than 30 days with federal mediators.

“We don’t want to cut services, we want to expand services,” Sokal told the crowd.

“We are trying to keep good jobs here in our community for our families, for our children, for those that come after us.”